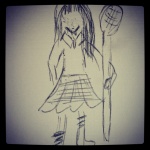 Annie’s not your average little girl.  She’s a rough and tumble tomboy who is skeptical of anything out of the ordinary.  Long blond hair, a face filled with brown freckles, and the most gorgeous blue eyes you’ll ever see.   Her passion is lacrosse, and you rarely see her out of her tartan uniform skirt or without her stick.  Her socks are mismatched, and almost always fighting gravity.  She’s constantly pulling them up to be sure she stays in “regulation”.    Annie is loyal to her two friends without fault.  When adversaries attempt to break this tight knit group apart, Annie is the one to stand solid in her convictions and never doubt her friends.

Nicholas is a charming rouge.  The girls first meet him as he’s wandering along the creek on his way home from his private school.  His shaggy hair is unkempt, shirt half out of his pants, and his hands tucked in his pockets.  He has a sheepish grin on his face as he meets the girls, and a brand new shiner surrounding his eye.  Annie is the brave one to ask “how’s the other guy look” which sends Nick in to a fit of laughter.  Nicholas is somewhat the class clown and has a passion for music.  If you listen carefully you’ll hear him whistling when he’s happiest, not even aware he’s doing it.   Nick lives to make other people laugh, and it is only every once in awhile he lets his guard down and you see a slight sadness behind his eyes.  Clara and Annie are the two people he counts on most in the world, and he’ll defend them fiercely in their adventures.

The three friends make an odd team of misfits, but they are, as Clara likes to say, “The bestest of friends you’ll ever have!

please keep in mind I am not an artist!  The sketches just help me picture the characters better.

"--- you don't reach Serendib by plotting a course for it. You have to set out in good faith for elsewhere and lose your bearings… serendipitously."

Meet Jaci - Really just a girl trying to discover what life is all about! Hopeful romantic .... in love with fairy tales, folk stories, music and laughter.